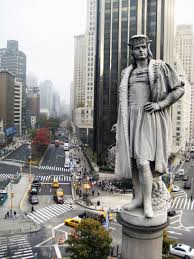 While Southerners agonize and fight over monuments to the confederacy, their northern brothers have begun to soul search some of the monuments they cherish.  The 76-foot monument of Christopher Columbus towering over Manhattan’s Columbus Circle in New York City is under review by Mayor Bill de Blasio as a symbol of hate.  Was Columbus a destroyer of Native American people and culture, or the explorer the Italian American communities of New York city celebrate as a favored son of their heritage? The monument was a gift from Italian Americans to the city in 1892.  It celebrated their pride in their heritage at a time when Italians fought for acceptance as white people in their new country.  The competing memories of Columbus have not been a victim of hate in the 125 years of Columbus Day parades, a holiday in October for schools and great Columbus Day sales in the department stores. The enormous statue has been offered a home on land in Staten island called “Green Kills Park”, part of the National Park Service, by the mayor of Staten island.  An alternate proposal by David Eisenach, a Columbia University historian, is to use the area around Columbus Circle to create an educational monument to the explorer’s legacy, including both the good and bad parts.  Another choice could be to place the monument in the Museum of the City of New York, where the thousands of items donated by Italian Americans over the museum’s 95-year history would join it.  At the museum, the statue could be contextualized through its own history with the City of New York.  The competing memories of Columbus, historical and modern, would put the statue in context and continue the discussion.